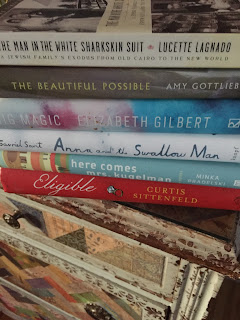 My life travels from book to book. I finish one and pick up the next. Still, I have never before kept track of what I’ve read. I’ve only just read.

What changed? For a while, friends had been asking if I wouldn’t mind sharing my reading list, but I didn’t have one. My friend Nina, who has long kept an annual list with pithy reviews, also inspired me (check out her favorites from 2016 http://ninabadzin.com/2016/12/24/top-5-books-2016/). And so my own year in books was born last January, a list that includes a very brief summary and, sometimes, a few thoughts, too.

I don’t plan my reading for the long haul. It simply unfolds as I go. On this year’s list, there are titles I first read as a girl and chose to revisit with grown-up eyes, as well as classics I hadn’t read before. There are books I stumbled upon in unlikely places and books I purchased soon after folding up their reviews. Sometimes, it was the right book at the wrong time, or maybe it just wasn’t for me at all, and I’ve left off titles I put down at the gate. I didn’t love everything on the list, but I never failed to love the process. Alas, there were so many books I did not get to read because 2016 ran out of time.

My favorites? Oh, I’m terrible at picking favorites of anything, especially books. I can only say that Amy Gottlieb’s The Beautiful Possible and Amor Towles’ A Gentleman in Moscow are the books that will stick with me most from this year, and I’m already rereading the latter because there are clues I missed (well that, and I have a crush on Count Rostov).

Though I read mostly fiction and memoir, I loved Daniel James Browns’ The Boys in the Boat, about the 1936 US Olympic rowing team. I feared the topic would fell me, but Paul Kalanithi’s memoir When Breath Becomes Air was everything the hype promised. Of the books I reread after years of distance, Carson McCullers’ The Heart Is a Lonely Hunter remains one of the most powerful, and George Eliot’s Middlemarch is the classic that filled a 900-page gap in my reading history. And the last book on the list, Gavriel Savit’s Anna and the Swallow Man, finished just hours before the ball dropped, will, I think, haunt me for a while.


Wishing us all a year in which to worry less and read more!

1. Malcolm Gladwell. What the Dog Saw
Essays. Particularly liked the one about hair coloring ad campaigns.

2. Alice Hoffman. A Marriage of Opposites
The fictionalized backstory on Pissaro, with beautiful imagery.

6. Marilynne Robinson. Housekeeping
About loss and survival and transience.

8. Patti Smith. Just Kids
The evolution of an artist, mostly through the lens of Smith’s relationship with Robert Mapplethorpe. Touching, poetic language.

9. Ian McEwan. The Children Act
Though I loved Atonement, this one unsettled me (which is probably what draws others to his writing). I had to stop midway.

10. Judy Blume. Blubber
First read this in grade school, and I’d forgotten how mean the girls in the story are. Still the best book I’ve ever read about bullying.

These next three I took out of the library for one of my sons, but I ended up reading them.

12. Mike’s Place
Graphic novel about the bombing of this Tel Aviv club.

14. Penelope Lively. How It All Began
About the Butterfly Effect on some folks in London.

15. Penelope Lively. Making It Up
Stories that consider her life, if it had taken her in different directions.

16. Daniel James Brown. The Boys in the Boat
The story of the US rowing team leading up to and during the 1936 Olympics in Berlin. Powerful metaphors, and who doesn’t love a victory over the Nazis?

17. Lois Lowry. Number the Stars
Story of rescue in Denmark during the Holocaust. Perfect entrée for young readers to begin a discussion about doing the right thing, despite the risks.

18. Shuleem Deen. All Who Go Do Not Return
Wrenching memoir about Deen’s leaving the Chasidic fold.

19. Thomas Hardy. Far From the Madding Crowd
A girl ahead-of-her-time girl trying to manage her own farm and juggle multiple suitors. A classic I rushed to read before the film came out (haven’t seen it yet).

20. David Arnold. Mosquitoland
The heartbreaking odyssey of a young girl who hops a bus when her family falls apart. YA

21. Amy Gottlieb. The Beautiful Possible
An almost-mystical story of love and marriage and faith and turmeric. Lyrical and lovely.

22. Monica Hess. Girl in the Blue Coat
About the Dutch Resistance during World War II. YA

24. Tom Hart. Rosalie Lightning
Graphic memoir about how the author and his wife cope with the loss of their daughter. Powerful if you can, too raw if you can’t.

25. Jumpa Lahiri. Unaccustomed Earth
For days after finishing this collection, I couldn’t get three interconnected stories out of my head.

26. Roz Chast. Can’t We Talk about Something More Pleasant?
Graphic memoir about caring for her aging, then dying parents. Heartfelt, honest, not easy to watch, but brilliant.

27.  Anna Quindlen. Plenty of Candles, Lots of Cake
Wonderful memoir about the blessings of getting older. This book inspired me to try standing on my head.

29. Sarit Yishai-Levi. The Beauty Queen of Jerusalem
About several generations of a Jerusalem family plagued by a curse that makes them resist love and consumes them with their own refusal.

30. George Eliot. Middlemarch
Shame on me for waiting so long to read this classic, though its 900+ pages make it a worthwhile commitment.

31. Carson McCullers. The Heart Is a Lonely Hunter
Another book I decided to reread. Compassionate, intense lens on the spiritual isolation that is part of the human condition. Astounding, left me breathless.

34. Frederik Backman. A Man Called Ove
Everyone needs an Ove in his/her life.

35. Mimi Sheraton. The Bialy Eaters
Short history of the bialy.

36.  Dai Sijie. Balzac and the Little Chinese Seamstress
About the power of forbidden literature in Communist China.

37. Gordana Kuic. Scent of Rain in the Balkans
Part of a very popular series about the history of a Sephardic Jewish family, though misinterpretations of Jewish tradition affect the plot.

38. Pamela Gien. The Syringa Tree
About a childhood during South African apartheid. Stunning, powerful. I sobbed through the final chapters.

39. Talia Carner. Jerusalem Maiden
About love and being true to one’s own artistic light.

40. Lucette Lagnado. The Man in the White Sharkskin Suit
Devastating memoir that evokes the elegant Cairo of the author’s youth and her family’s change of fortune when they are forced to leave Nasser’s Egypt.

41. Vanessa Diffenbaugh. The Language of Flowers
About a damaged young woman who discovers her ability to communicate through flowers.

42. Celeste Ng. Everything I Never Told You
About a Chinese-American family and the fragility of happiness.

43. Daniel Silva. A Death in Vienna
My husband is a huge fan of Silva’s books, so I finally read this one about the death of a Nazi hunter and the search for his killer.

44. Geraldine Brooks. Caleb’s Crossing
Touching story of two free spirits and their quests for knowledge at a time of ignorance and social limitations.

45. Amor Towles. A Gentleman in Moscow
This wonderful story about Count Alexander Rostov, sentenced by a Bolshevik tribunal to house arrest in an upscale hotel, cast a spell on me.

46. Ilse Koehn. Mischling, Second Degree
The memoir of a German girl with a partial Jewish heritage (unbeknownst to her), who becomes a leader in the Hitler Youth. One of the first Holocaust-era books I read in my own youth.

47. Elana Ferrante. My Brilliant Friend
I tried three times, most recently with my book club. I feel like something’s wrong with me that I couldn’t get into this bestseller.

48. Elana Ferrante. The Beach at Night
Fable for children, a short read. It would have terrified me as a child.

49. Zdena Berger. Tell Me Another Morning
A remarkable autobiographical novel about the friendship that enables three young women to survive the depravity of the concentration camps.

50. Curtis Sittenfeld. Eligible.
A fun, smart retelling of Pride and Prejudice. Exactly what the book doctor ordered this December.

51. Minka Pradelski. Here Comes Mrs. Kugelman
Engrossing tale about a German Jewish woman who travels to Tel Aviv to fetch an inheritance, but falls into the magical story about a town in pre-war Poland (and sadly, its destruction).

52. Gavriel Savit. Anna and the Swallow Man
An otherworldly story about a young girl from Krakow, whose intellectual father is taken by the Germans in 1939. She happens upon a mysterious gentleman, who helps her survive the war.