A Blanket Measure of a Life 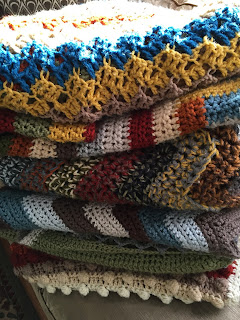 I recently finished crocheting a large afghan, a project that took me several months to complete. Because life is busy, I had to sneak in stitches whenever I could, most often in the school carpool line. I felt lucky for every one of those therapeutic, creative moments, and as always, excited about crafting something with my hands.

Heading in, I knew I was going to make mistakes, like missing stitches or changing color at the wrong juncture. Afghans are my favorites precisely because the gaffes rarely alter the overall appearance of the finished product. Unless I catch them right away, I hardly ever fix them. I like how they remind me that the ability to create is G-d-given, that no matter how well we hone our craft, we will never possess His mastery.

Mostly, I relish the intimacy that develops between me and whatever I’m making. An afghan and I fall into something akin to a marital routine several rows in. We learn to recognize one another’s touch, and the better acquainted we become, the more forgiving we are of our respective quirks and foibles. When I stand back, I see only a lovely picture formed by thousands of fiber pixels. The mistakes, lost in a sea of stitching, have all become an integral part of its beauty.

So it’s no surprise that I began to think about what I’d like to make next the moment I folded up this latest project. There’s something about the act of crocheting that keeps me grounded and focused, and to be honest, I needed a new activity for the carpool line.

While heading upstairs to my yarn basket, I caught my image in the mirror. As a rule, I avoid inspecting myself too closely, but for some reason, I was compelled to take a good, hard look. My body and I have been together for a while already, and there’s a tenderness between us from passing the years in one another’s company. Still, I often fail to see my imperfections in the same loving, forgiving way I do the mistakes in an afghan. How easily I forget that the lines and creases and stretch marks aren’t mistakes, but trophies, and that in either case they are the stitches that compose the full picture of who I am.

I walked past my sons’ rooms, where afghans sit folded at the edge of their beds. There are more in every room of the house, at the ready to warm and comfort us, all souvenirs of the moments in which I made them. One I finished while recovering from a hospitalization. Another on a road trip to Mount Rushmore (my husband was driving). Yet another because the pattern challenged me at a time when I needed to prove something to myself. And there are still others, swirling around in my imagination, awaiting the light of day should G-d continue to bless me with dexterity and patience.

I know that the quantity and the diversity of a crocheted afghan collection are not the standard means to qualify a life. Perhaps the idea rings folksy and naïve. But we must all find a way to account for our place in this world, and my stash, mistakes and all, strikes me as good a measure as any.
Posted by Unknown at 6:55 AM 1 comment:

You Never Know What You’ll Find in the Snow

The blizzard of a week ago already feels like ancient history, yet the walking remains treacherous. Terrified of falling but determined to get some fresh air, I strolled downtown on Friday morning despite the risks.

So many families were away for winter break that I passed only one friend entering her car – a rarity, because I usually bump into a lot of people on these walks. I confess to relishing the unexpected solitude and the emptiness, and to having the sidewalk to myself. And like a child, I enjoyed being outdoors in the cold, winter wonderland, for no matter how old I get, I still love snow’s potential to become whatever we shape it into.

In that moment, though, I was focused mostly on not falling. I carefully navigated around snow piles and tiptoed over ice patches, the weight of my grocery bags keeping me in balance. There wasn’t much to distract me, only a few brittle plants peering out here and there. So I was taken aback by the sudden appearance of a bright red spot on the horizon. I thought it was the thumb of a child’s glove emerging from the snow, but as I got closer, I saw that it was a strawberry.

It could not have been there long. It hadn’t been devoured by one of our resident wild things, nor had it bled crimson into the surrounding white.

Around the next mound of snow, there was another.

Five strawberries in all, as if they were trying to tell me something. I shrugged and continued home, letting the story write itself in my head.

At first, I considered the possibility that someone might have been walking a few minutes ahead of me out of my range of vision. We’d missed one another, our footsteps silent on the soft snow, our figures obscured behind the snow mounds. It seemed that the bag she was carrying had torn on one of the dried shrubs, allowing its contents to spill out and leave a trail. But the berries were too precisely positioned for that to have been the case.

I wondered if their exact placement had been the handiwork of a child instead, who fretted that the animals must be starving when the trees are so bare and the ground is blanketed. A small boy had waged a well-meaning, persistent campaign until his mother had given him the bowl of berries and he’d gone out in his snowsuit to position them just so. Yet if that had been true, he’d have been kneeling right then on the couch in his front window, waiting with anticipation for the animals to come and partake of his gifts. But the curtains were drawn on all the houses I passed on my way.

That night, my youngest son and I joined friends for Shabbos dinner while my husband and our other boys were together in Jerusalem. The berries were already gone by the time I walked over after candle-lighting, likely eaten by some hungry animal unable to believe his luck. During the meal, the hostess mentioned strawberries. I reacted with such joy, thinking I was about to solve the mystery since they lived near where I made my discovery. Alas, no. She was certain her packages were intact when she returned from the market.

It’s unlikely I’ll never know how, or why, those berries appeared in my path that morning. Sometimes things don’t happen for a reason. Sometimes, they just happen.

Still, the animal’s luck was mine, too. The serendipity of finding five bright red strawberries in the snow on a silent winter day had already found its way into the treasure chest I keep inside my head. They reinforced my belief that there are stories everywhere – a kind of magic that, like snow, can be shaped into anything we want it to be.

And that seems like reason enough.
Posted by Unknown at 4:26 AM 3 comments: