Much Ado about a Door 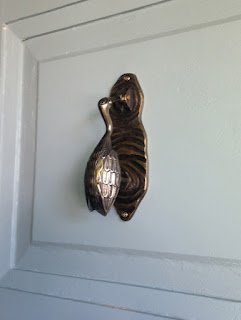 I never expected that our front door would ever matter much to our boys.

Until recently, they ignored it entirely. Even several years ago, when we gave it sudden flair by dressing it in a lovely red called “Claret” and adding bling with a doorknocker I’d picked up on a trip to Budapest, they hardly noticed.

As for the door itself, we once would’ve gambled that the heavy wooden panel – installed in 1957 when the house was built – would outlast us here. But the past winter was harsh and the door lost much of its functionality to the elements. For starters, the door became difficult to open. Cold air, however, rushed in unimpeded through large cracks in the inset panels. Others might’ve replaced it without a thought, but we decided, stubbornly, to take up the challenge of fixing the door instead.

My husband, donning his macho man-about-the-house work clothes, wood-filled and spackled. I selected a deep green shade of paint hailed by designers in the stack of decor magazines on our coffee table. Our door was going to make a statement.

Alas, my selection was better in theory, or perhaps on bigger, fancier houses, or maybe just on those glossy magazine pages. It was bad enough that the paint went on like molasses, but the dark shade highlighted every drip, which then reflected off the glass of the storm door. I tried to ignore these little details. But day after day, the boys told us that the color also gave the slightly creepy illusion that the door was always open and I had to agree with their assessment.

My husband, not wanting to repaint, insisted he liked it, and that it didn’t matter to him what the boys thought of it since they aren’t interested in our opinion of their haircuts. Still, all three of our sons commented on the door’s putrid shade several times a day, and eventually wore their poor father down. I bought a new color, left the can near the front door, and that was that.

The problem was we could not get away with painting directly over the green, which had dried tacky to the touch. Besides, the paint was now so thick the door wouldn’t open at all. We needed to sand back to the original layer – three coats down by our best estimate – before we could do anything. It would take a lot of work, but talk of heat guns and power tools inspired the boys to volunteer. In the end, though, it was my eldest with time on his hands who put in the bulk of the elbow grease.

Wearing a ventilation mask, he used the heat gun to strip layers of paint, one after the next for a total of six – six!!! Patiently, he sanded and primed, taking periodic breaks during which his siblings briefly took up the work. I’m delighted to report that one week later, the door now sports a lovely shade of blue and a new duck-shaped doorknocker. Like wrinkles, vintage nicks and pings give the door character.

That we rescued the door is its own reward, but it also seems to be a kind of repayment for its many years of service – protecting us, and separating our public and private lives. It has witnessed so much of our family history in this house, watching our comings and goings, greeting our guests, and seeing us off to work, school, and everything in between. Now that it’s fixed, it has returned to the business of keeping out the elements as well.

A door is more than a way in and out. It marks time, too, recording not just the past and the present, but also, G-d willing, what lies ahead: the future in which we will continue to raise the boys behind its protective wooden panels, and one day, build a magical palace here for our grandchildren. And as my husband likes to say, we pray this will be the door that will keep us warm when we grow old and wrinkly like two dried up raisins, which probably sounds cuter in Croatian.

The door is a part of who we are. Replacing it was never really an option.

Posted by Merri / mypaperedworld.com at 9:34 AM No comments:

Of Pomp and Circumstance

Each June, the same sweet scene plays out in nursery schools across the country.

To the sounds of “Pomp and Circumstance” or something more festive, little girls and boys find their spots in dollhouse chairs at the front of their classroom. The audience beams as the children perform a repertoire of songs from the school year and the teacher speaks about the class’ mastery of shapes and scissor skills. The program concludes with the awarding of diplomas, after which the children smile for pictures and doff their mortarboards, a move they’ve rehearsed for weeks.

It’s the kind of ceremony designed to pull parental heartstrings. Though our knees stiffen in the same tiny chairs occupied by our offspring, we do not complain, for we are enjoying the performance too much to notice. We may even cry a few tears, a mix of happy emotion and awe at the hasty passage of time. After all, just yesterday these preschoolers still slept in a crib.

I remember the first graduation I attended for my eldest when he moved up from the two-year-old class to the two-and-a-half-year class at his preschool, a slight progression which nonetheless merited paper caps with tassels and a collation buffet of juice and cupcakes. Though part of me wanted to believe the whole enterprise was silly, the teacher snagged me with an adorable invitation I could not refuse. I dressed my son in a fancy outfit, a button-down shirt with shorts and suspenders. In my memory, he appears preciously grown up, though in the photos he looks more like an extra in The Sound of Music.

That event and the preschool graduations that followed were schmaltzy, but you’d have been hard-pressed to find anyone in attendance at any of them who didn’t love every minute. What I know now, which I did not grasp then, was the fact that those graduations were far more than the photo-op floorshows they appeared to be. They had a deeper layer of meaning humming beneath the surface, one I didn’t recognize until many years later, when my eldest son’s high school graduation date stared at me from the calendar.

Preschool graduations are practice runs for all the ones that come after, not for the children, but for the mommies and daddies and grandparents and guardians in the room. They glimmer like crystal balls, giving us a glimpse into a future when the pomp and circumstances will be big and real, testing our parental mettle for the day when we have to let our children move on, not into the next classroom, but out the front door and into the world.

At the graduation this coming Sunday, I expect to be a sobbing mess, which is why I’m writing this now. But please don’t mistake my emotions for sorrow. I know it’s all a blessing. Moments like this make it easier to forget the bumps we hit along the way, the challenges we presently face, and the worries about future unknowns. As my son, who towers a full head above me, embarks on the next leg of his journey, we as his parents step into uncharted waters, too. I pray that we will all have the wherewithal to steady our ships.

Our children may be ours, but they never belong to us. We must love them and raise them to belong to themselves, and when the time comes, we must let them go, our eyes never losing sight of them.
Posted by Merri / mypaperedworld.com at 3:58 PM 2 comments: